The events leading to the creation of the Russian Grand Priories are as
complex as they are fascinating. The involvement of Imperial Russia with
the Order of Saint John was of long standing. As early as the end of
the 17th century, Emperor Peter the Great had sent Field Marshall Boris
Sheremeteff as the head of a delegation to the Grand Master on Malta.
The delegation was successful, as a result of this mission Field
Marshall Sheremeteff was honored by the Order and wore their decoration.
It is to be seen still in his official portrait preserved at the
family’s Moscow seat at Ostankino. Empress Catherine the Great in 1782
sent heir apparent, Grand Duke Paul, to Malta on a visit to Grand Master
Emanuel de Rohan.

Through the counsel of Bailiff Giulio Litta, Emperor Paul created an
Orthodox Grand Priory of Russia on an Ecumenical basis, including Roman
Catholics and Lutherans. Emperor Paul introduced the Roman Catholic
chivalric idea to his Orthodox subjects and nobles. The newly formulated
Roman Catholic and Russian Orthodox Priories of Russia were richly
endowed with a large treasury, buildings and chapels. Many members of
the Russian nobility including members of the Imperial family, male and
female, were inducted into the Order. Clerics of the Russian Orthodox
Church, including Bishops and Metropolitans, were admitted into the
Order. The Court Chapel had an Orthodox priest as chaplain and the feast
days of Saint John the Baptist [or popularly called the Forerunner in
the Eastern Church] were given new importance and placed on the Imperial
calendar. Eventually, the relics of Saint John and memorabilia of the
Order were specially housed in Saint Petersburg [eventually these relics
survived the Revolution of 1917 and are today in Cetinje, Montenegro].

During these events, on June 11, 1798, Grand Master von Hompesch soon
faced by Napoleon Bonaparte’s fleet quietly surrendered the impregnable
city of Valletta without a struggle. Malta and the knights treasury
became part of Bonaparte’s realm. As the Order of the Temple of Solomon,
the Order of Saint John may have passed into history as a relic of the
absolutist past. Its role against the crumbling Ottoman Empire had
ended, and its place in the newly defined republican Europe was limited.
It is at this point in world history that the Order reinvented itself
and in more than one guise. The Western Order was ultimately to split
from the Eastern one. In the West the Order barely survived. In the
Roman Catholic areas it partly was kept alive due to the influence of
the ever waning papacy.

After the seizure of Malta by Napoleon, many of the remaining knights
fled to their protector Emperor Paul in Saint Petersburg. They
repudiated on August 26 and again on the 29th, 1798 their allegiance to
the then Grand Master von Hompesch. On November 27, the knights in Saint
Petersburg elected the Emperor [proclamation], a supreme autocrat in his own right, as
their new Grand Master [acceptance]. The Pope, Pius VI, was in in exile if not house
arrest under Napoleon, in Tuscany till March 29, 1799. During this time
he was extremely ill and dying. He was carried half dead from his final
place of exile, the Certosa of Galluzzo, near Florence and died on
reaching France near Valence. During this final illness the pontiff,
when lucid, counseled through his Nuncio Count de Litta, brother of
Guilio, that the Emperor Paul be patient with his dealings with the
Order. Emperor Paul, a married man with a wife and children and the
leader of the Russian Orthodox faith, eagerly accepted the office of
Grand Master, although by the Order’s own rules he was Russian Orthodox
and married. In June of 1799, Grand Master von Hompesch abdicated his
office. Only the knights of Spain, eventually, did not recognize the
Russian Emperor as the new Grand Master; instead, they opted for the
protection of their own king.

A new and changed Order was created. The Emperor of Russia through
his absolute powers as autocrat had created an entirely new Order based
on an ancient foundation. It was from this source that the present Order
of Saint John traces its descent.

The Emperor Paul’s Edict of November 24, 1798 sums up the formation
of the new Order while underscoring the continuation of certain elements
of the old Order. He declared as Emperor and Autocrat that he accepted
the Grand Mastership and would preserve the Roman Catholic character of
the Order for the Roman Catholic membership. The Emperor started the
creation of his new Order [which in his mind probably was just a
continuation of the old] by basing it on hereditary privilege and
inclusion of both males and females. He established the authority of the
Order in his own person. At that point, the Emperor had created a new
Order. Further edicts established the nature and context of this Order. 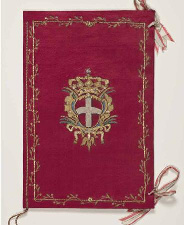 The Emperor radically changed the Order in the aspect of his newly
knighted Russian Orthodox membership. Unlike the traditional character
of the Order, the knights were no longer bound by celibacy and instead
included both male and female members. To prevent extinction, the new
Emperor created in 1799 a new degree of knighthood, that is, the
Hereditary Family Commanders. Simply, Hereditary Family Commanders
govern units which were passed down from one generation to the next. It
insured a perpetual continuation of the Orthodox Order. In addition to
this, the Emperor brought many more individuals of the Russian Court
into the Order as well as Russian Orthodox priests and bishops. 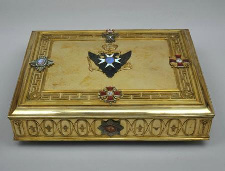 The relics of the Order were eventually sent by Grand Master von
Hompesch to the Emperor. The principal relics were the revered icon of
the Our Lady [Theotokos] of Philermos, the relic hand of Saint John the
Baptist and the Cross of Grand Master Jean de la Valette. For the icon a
riza in the Russian Church style was created from gold with fine gems
as gift adornments. All three relics were entrusted to the Dowager
Empress Marie Feodorovna after the revolution. The icon survives to this
day in a monastery in Cetinje, Montenegro, while the famed Cross was
gifted after the Revolution of 1917 by the Russian émigré community in
Paris through the House of Romanoff to the revived powerful and
influential papal Order in an attempt to a find reconciliation between
the two Orders. Originally, the Order’s relics were specially housed at
the Gatchina Palace and feast days were created for them by the Russian
Orthodox Church. The Emperor ordered a state crown as head of the Order
to be made for him. He is pictured with this crown, a copy which to this
day is proudly displayed in the Roman Catholic headquarters of the
Order, The crown, which became part of the Imperial Russia regalia, was
used repeatedly in the remaining century of the Russian Empire. In many
Russian Coronation books of 19th century it is depicted along with the
other historic crowns of Russia. The emblem of the Order was added to
the Imperial Russian coat of arms, and the Maltese cross became a
military decoration for noble Russian officers of the Chevales Gardes Regiment. 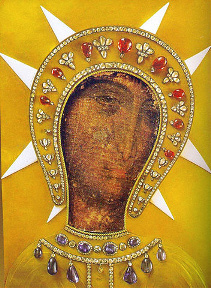 The Order’s history in Russia after the establishment of the new Order
is well documented. It became an important social force in the Imperial
Court. Emperor Paul gave the Worontzoff Palace in Saint Petersburg as
the site of the Order. In the palace he established two chapels, one for
the Orthodox knights and dames of the Order and the other for the Roman
Catholic membership. Each chapel was lavishly decorated. A throne chair
as Grand Master for Emperor Paul was still in suit in the early 20th
century and survives to this day. By 1800, the Orthodox Grand Priory of
Russia had over four hundred knights and dames and the Catholic Grand
Priory of Russia had almost two hundred members. 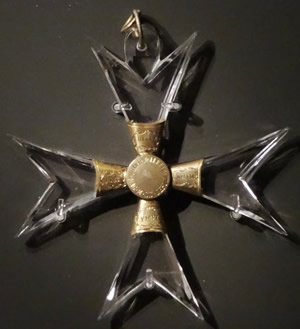